For an Icelandic experience with a difference, we heartily recommend Into the Glacier which can be visited as part of a tour from Reykjavik or, as we did, by self-driving to Klaki base camp (or as far as Húsafell in the winter).

The easiest way to reach base camp from Reykjavik is by heading north along the ring road and then following route 50 when you reach the tunnel to Borgarbyggð. For some reason, our satnav thought we might prefer a more adventurous route and took us along the perhaps slightly more direct routes 30 and 550. This was fine for the most part, but the final 40-kilometre stretch along the F550 (one of Iceland’s mountain roads) was a little hairier than we had anticipated so early on in our time in Iceland!

However you choose to get there, you won’t see the glacier at first, but you will see signs that are indicative of its previous presence. Markers that depicts the glacier’s maximum extent every 20 years highlight the rapid retreat of the glacier over time.

Between the markers for 1940 and 1960 is Klaki base camp. Whatever your approach, the last stretch of the drive is very uneven and it’s necessary to have a 4×4 vehicle, regardless of the time of year you visit. 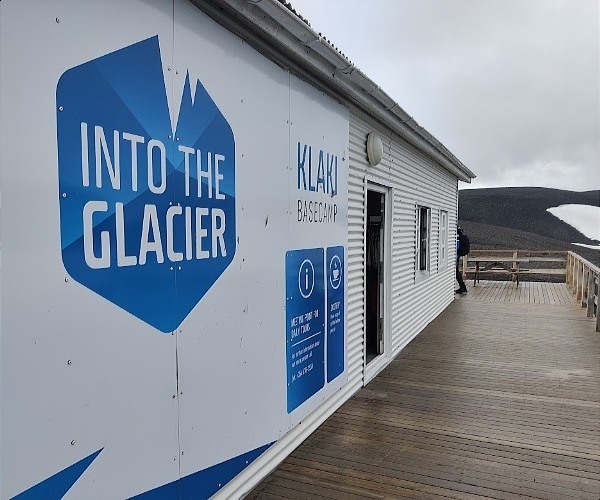 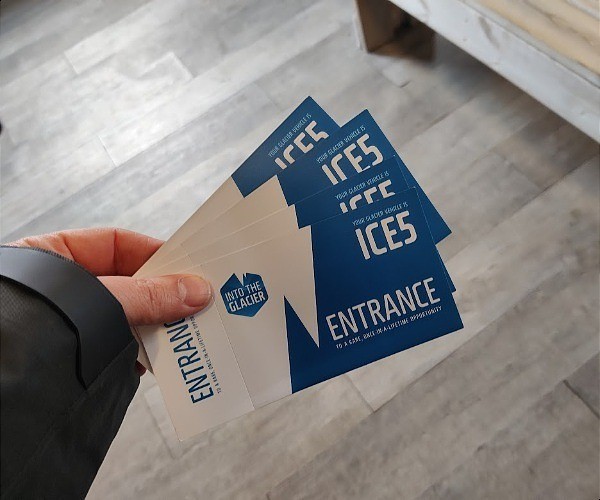 If you’ve come dressed for Iceland’s variable weather, with warm clothes, waterproofs and sturdy footwear, then you ought to be reasonably well-prepared, but you might like lightweight to take advantage of their waterproof overshoes. There are parts of the tunnels that can then be quite wet underfoot as meltwater find its way through the glacier, so I would definitely recommend these. 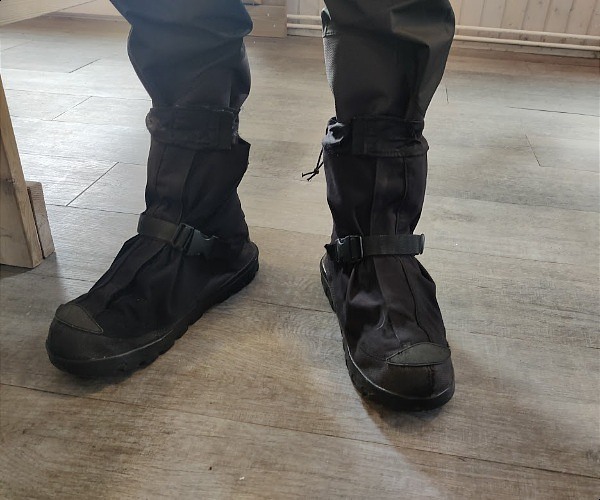 As the name suggests, Into the Glacier takes you into manmade ice tunnels within Langjökull, the second largest ice cap in Iceland (after Vatnajökull which is by the far the largest and around eight times the size) and interestingly the onlyly-owned private glacier in the world. It is open year round and is the only glacier tunnel built specifically for visitors, not just in Iceland, but in the world. It is also the world’s largest manmade ice tunnel.

But first you have to get there. Luckily, your ticket includes transport on to the ice camp aboard old specialist NATO missile vehicles that have been adapted especially for this unique attraction. It follows a GPS-led route to the tunnel – crevasses determines the route taken, and it changed each year. 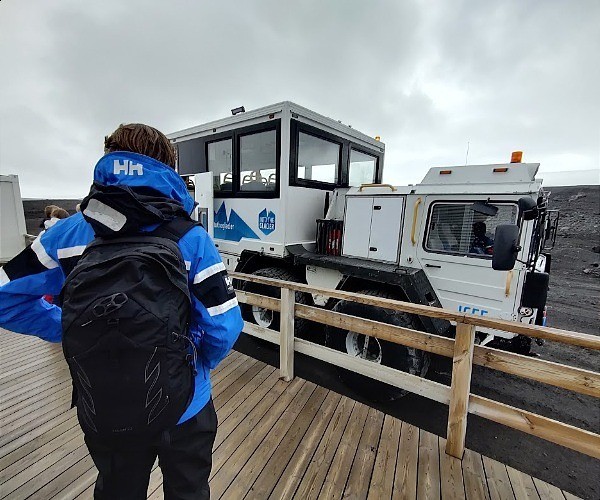 Inside these 8×8 monster trucks, it’s pretty comfortable but you do need to use seatbelts as it can be a little bumpy. 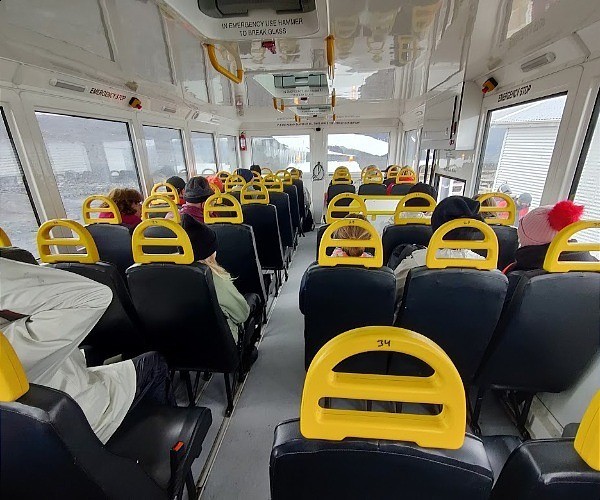 For the driver, it’s apparently an even bumpier ride. From within his cabin, he can monitor the pressure in the tires via an app, and adjust the level of inflation to suit the changing terrain that he finds himself driving over. 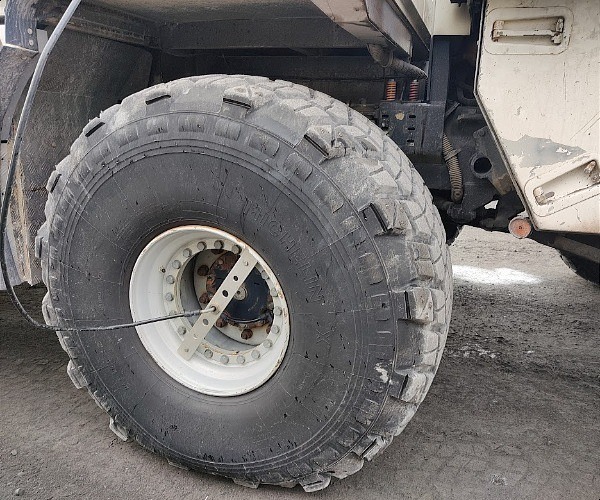 The truck took us to a location that is 1,260 meters above sea level. On the journey, we were accompanied by two English-speaking Icelandic guides who shared their knowledge on what defines a glacier and how it is that glaciers are formed. We learn that there are 300 glaciers in Iceland (200 of which are at Vatnajökull alone) and around 7 or 8 ice masses.

The guides had quite a dry sense of humour – something we encountered on a number of our tours – and told us, as we ventured on to the ice, about how there were three different animals to look out – the Arctic fox, ptarmigans and middle -aged men who get stuck on snowmobiles and need rescuing.

But there are serious messages also as we pass yet more markers that show how much the glacier has retreated alone every 20 years – apparently more than 100 meters since 2019. We are further reminded of the climate change message when we hear that, close to Langjökull used to stand Okjökull, a glacier that was declared dead in 2019. They even had a funeral for it – you may have heard about it in the news. 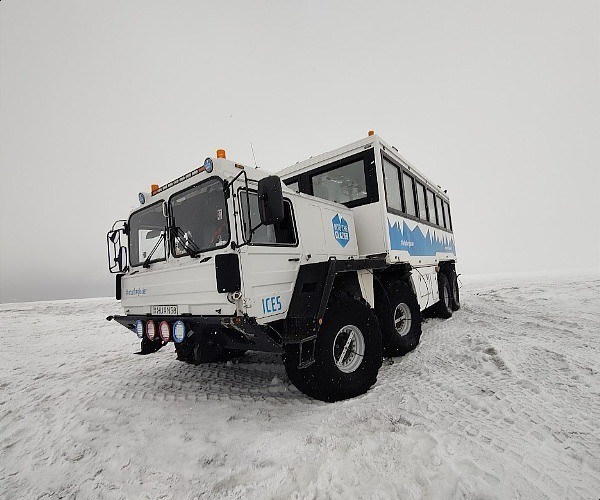 With our journey complete, it was time to enter the glacier. As you can see, it looks rather underwhelming from the outside. However, all that changes once inside. 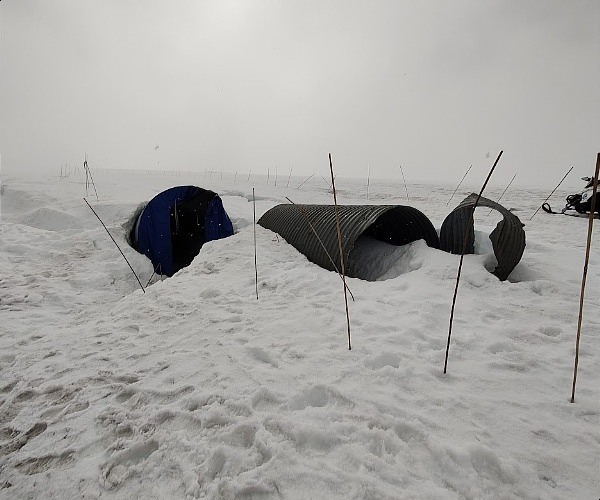 The first part of the tunnel is quite dark and re-enforced with a large cylindrical metal structure. 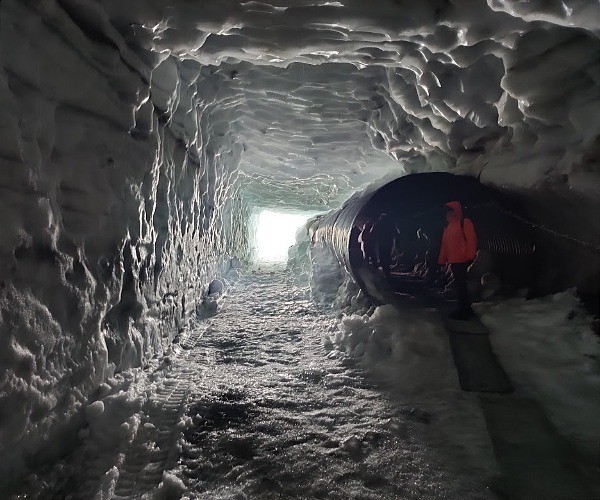 Once properly inside, you head down into a network of LED-lit tunnels measuring 550 meters long and up to 40 meters below the ice surface. 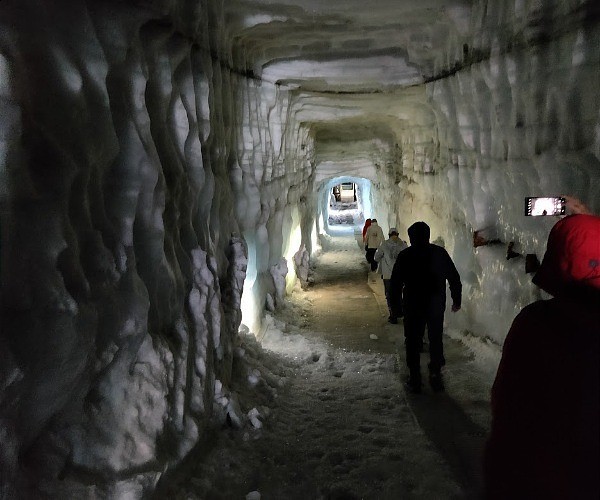 Quite early on, you stop to put on crampons. These are easy to put over your shoes – you simply fit them at the front and then stretch them underneath your shoe until they can be affixed to your heel… and then you are good to go! It just gives you a little more grip as you wander around the tunnels. 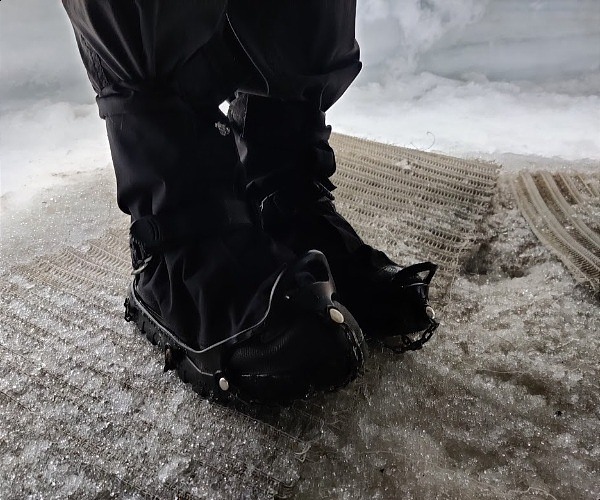 Walking further still, we reached a sign where we stopped for photographs and learned more from our guides. 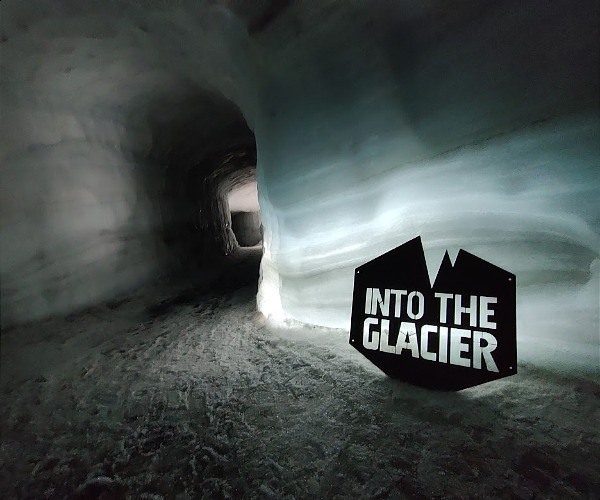 As we continued to explore the tunnel, there are places where it really is quite wet – dripping down from above as well as underfoot. If you’re visiting during Winter, this will be less of an issue of course, but you may need to wrap up more! 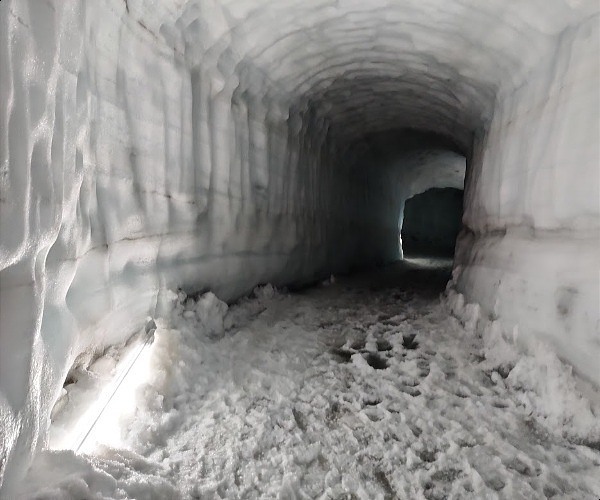 A small off-shoot to the main tunnel takes you to a small chapel, complete with seating area. Who knew that you could get married under a glacier?! 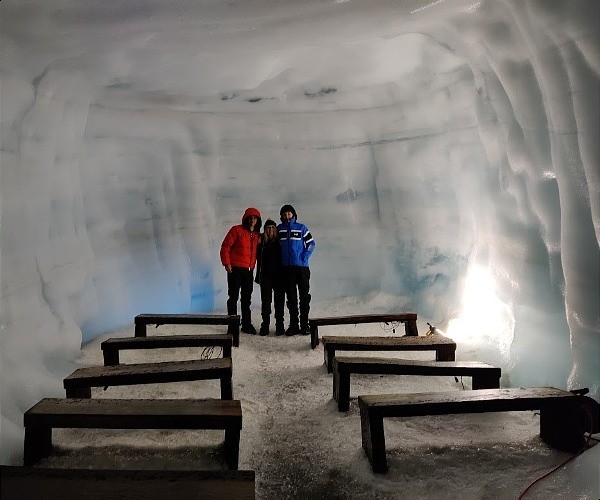 Look carefully at the ice and you will see trapped bubbles of ice. Within the chapel, there are some clusters of bubbles that have taken on some rather fun formations. One that is said to look like a fish… 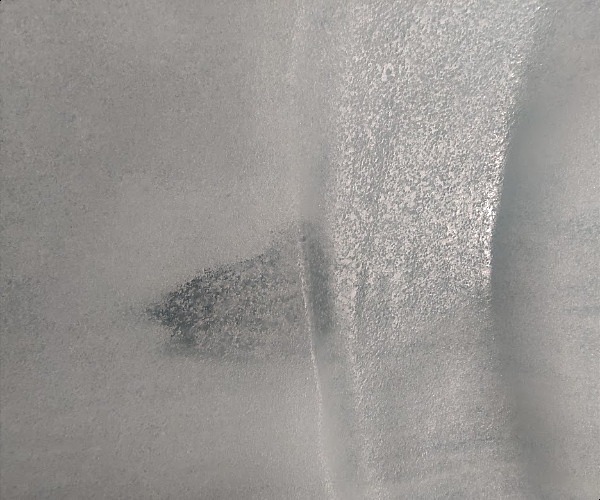 …and another that, if you tilt your head enough, shows a smiley face. 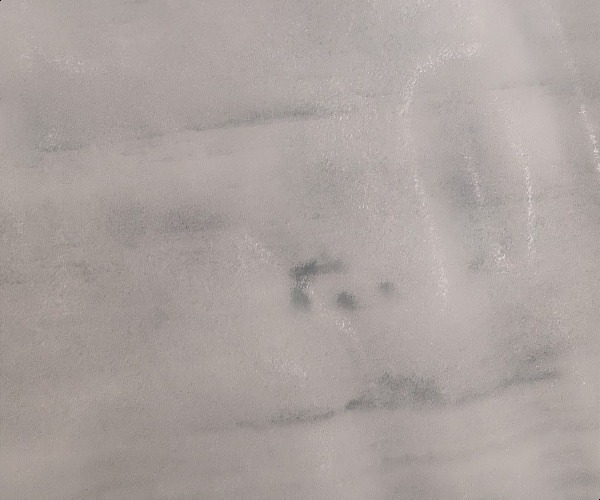 There’s also an area on the tour where you can see a crevasse from below, where ice is quite dirty because of the accumulation of debris within the crevasse. 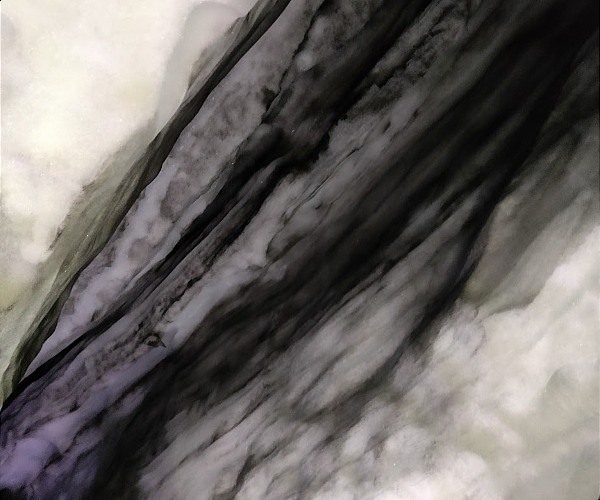 You’ll rely mostly on your guides to learn about the glacier on the tour, but there is one or two signs giving some pictorial insights into the glacier’s past and future. 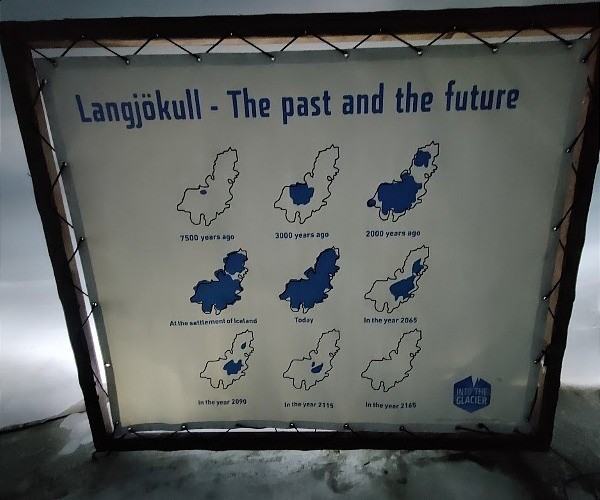 Apparently, when the tunnels were first created, two separate tunnels were created and the idea was that they would join to create a circle. Their calculations didn’t quite work, and they ended up creating more of a heart shape instead! 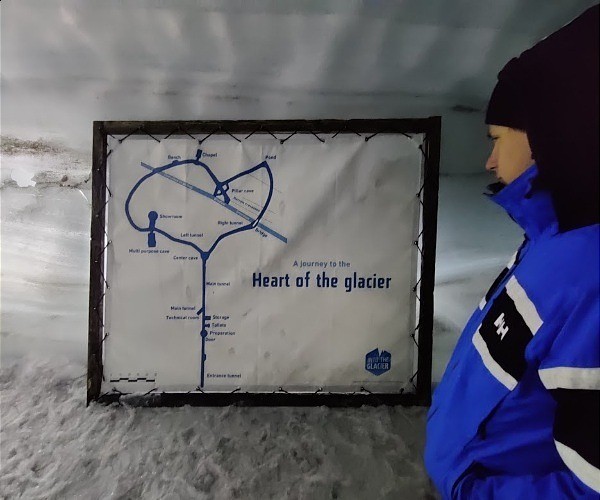 Would we recommend Into the Glacier? Most definitely, yes! Not only is it a really unique experience, but it was fun and entertaining for all of our family, as well as interesting and educational. Although the entire experience from arriving at basecamp to returning is around 3-4 hours, you are only walking in the tunnels for about one hour of that time, so this is well within the capabilities of most younger children also. 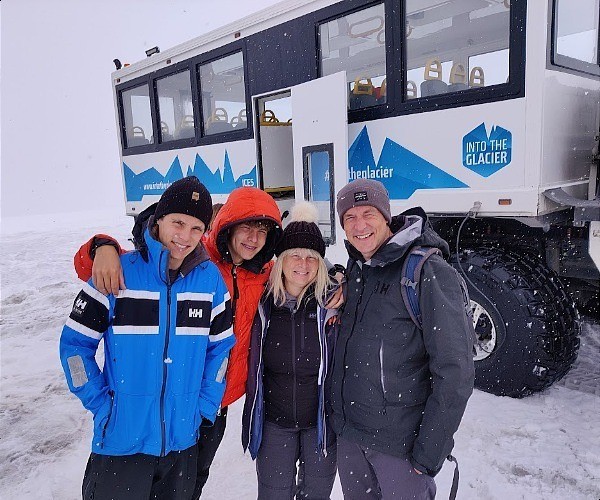 The following Google Map shows the meeting point in Húsafell, which is where you’d meet if visiting in the Winter.

If traveling in the Summer, you’d start from Klaki base camp and the following Strava map shows the exact route we followed from base camp to the tunnel and back.

Planning a trip to Iceland yourself? You can watch a video from our trip to Iceland here. You will see footage from Into the Glacier between 30 seconds and 54 seconds into the video:

Disclosure: This post is sponsored by Into the Glacier. Our trip to Iceland was also sponsored by Helly Hansen.