Back in 1727 this Georgian hunting lodge fondly recalled classical architecture: elegantly balanced, symmetrically proportioned and brilliantly, dazzlingly white. Cant Hill, as it was then named, was the resting place for royals as they hunted in Windsor Park.

Since it became a hotel in 1965, renamed Burnham Beeches Hotel, guests have looked out from the sash windows of the white Georgian facade and taken afternoon tea on the extensive lawsns. With its aristocratic looks, this house has history. Thomas Gray, the great English poet, is said to have visited his wealthy uncle at the house and to have been so inspired that he wrote the famous poem Elegy in a Country Churchyard.

Less solemnly, more modern history records that Burnham Beeches Hotel rocked to the sound of Football’s Coming Home when Gazza, Lineker, Shearer, Southgate et al used the hotel as their base for the 1996 football Euros. 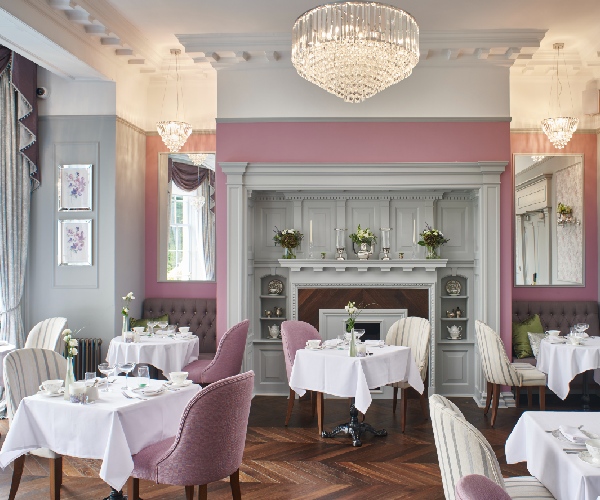 Reception, more a lounge with its historic grandfather clock than a check-in, sits between old and new: the original Georgian house and a newer extension.

A misty impressionist print of morning sunlight backlighting a forest, hung above the six feet wide bed, echoes the view through the two windows. It is a large bedroom with writing desk, table and chairs for room service. There’ is even an entrance hall housing a fitted wardrobe, safe and tea / coffee point. 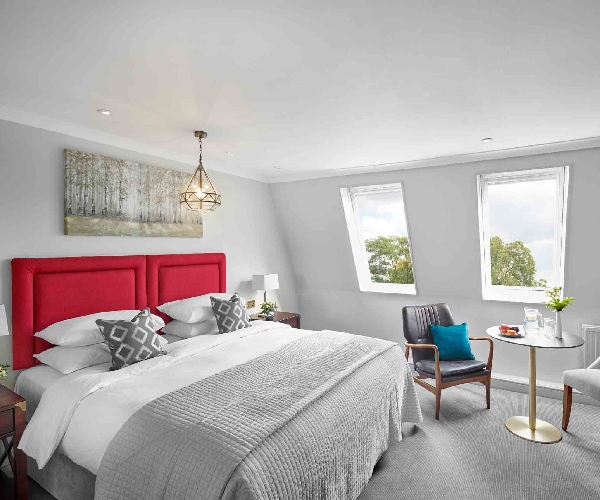 A touch screen panel provides air-conditioning as well as heating to meet the vagaries of the British climate. A wide plasma television screen contrasts with a retro radio and an old-fashioned black telephone from the days when operators connected calls at the local exchange.

Another spacious room which ticks all the boxes for contemporary hotel bathrooms. 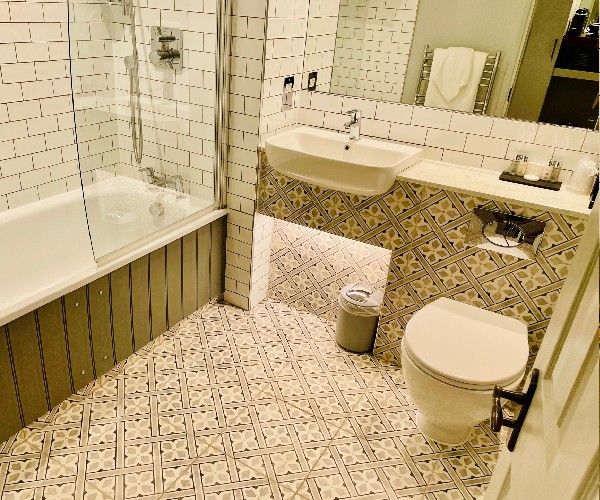 Based in the original house, The Oak Restaurant is a two AA rosette restaurant. Breakfast and lighter lunches are served in The 1727 Brasserie. 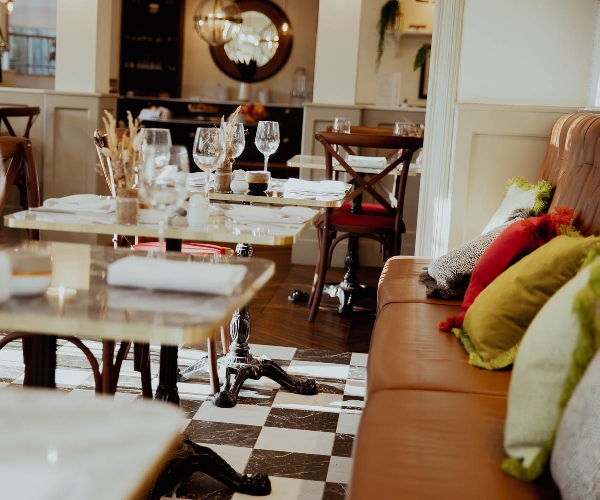 The Soul Spa attracts guests for treatments and for longer stays too. Facials, body polish treatments, massages and eyebrow care all tempt visitors. 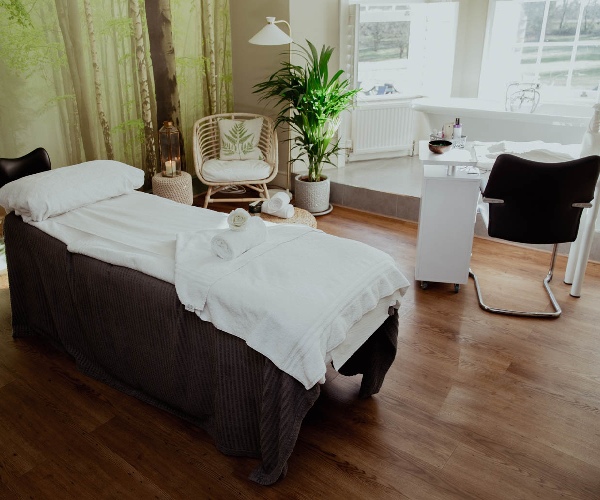 Just a few miles from the M4, the hotel is located in ten surprisingly quiet rural acres. Nearby, the 220 acres of Burnham Beeches Nature Reserve provides many walks meandering through the ancient woodland. Burnham Beeches Hotel is a tranquil base for visiting Thames Valley attractions: Marlow, Windsor Castle and Windsor Great Park. 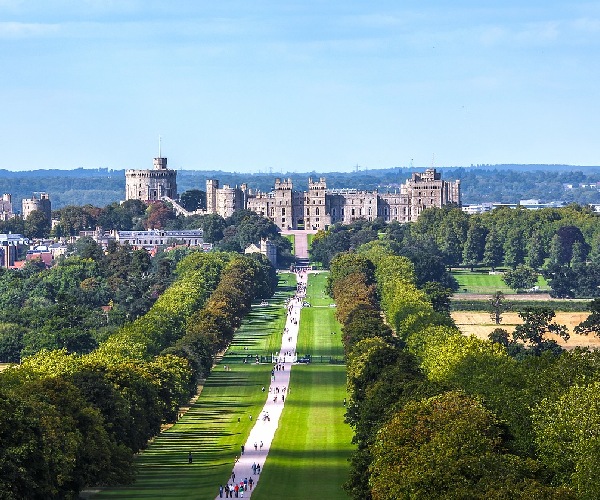 We were welcomed to our room with homemade chocolates and a fresh fruit platter. 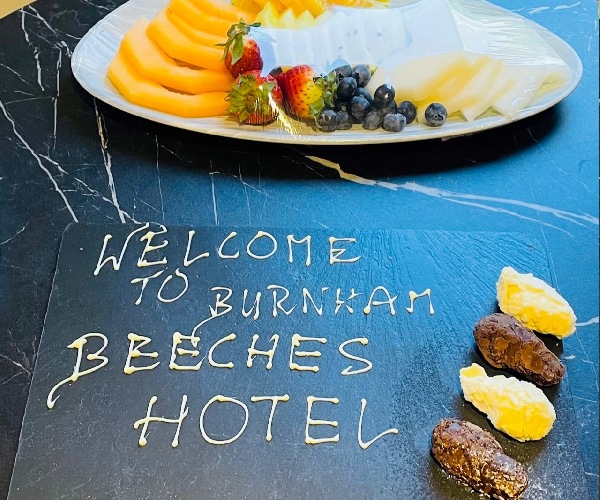 In The Tea Room, there is a Children’s Afternoon Tea menu too, beginning their afternoon tea education early.

Rooms begin from £90 which includes the buffet breakfast for two guests. 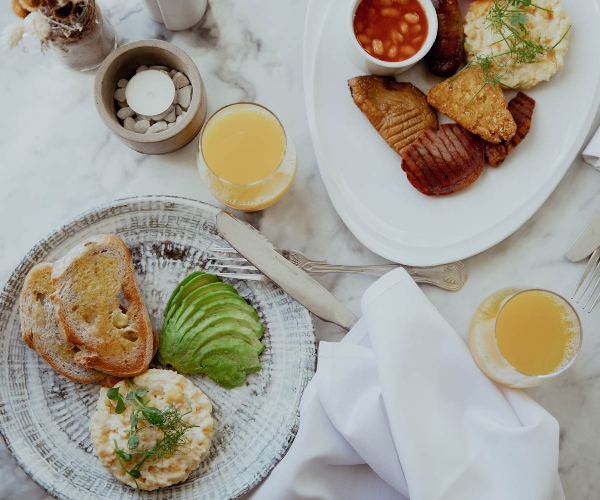 It is a price representing very good value as it also provides access to the hotel’s leisure facilities.

Afternoon tea is both an art and a science when it is served in the dove gray Tea Room. Beneath the glittering chandeliers, Georgian elegance is given a lighter touch by with soft furnishings and crockery from Laura Ashley. A trio of silver tea-pots displayed on a shelf reminding guests that this is a room dedicated to afternoon tea. Soft plum draped window scarves top towering silver curtains which frame serene views across the lawn. 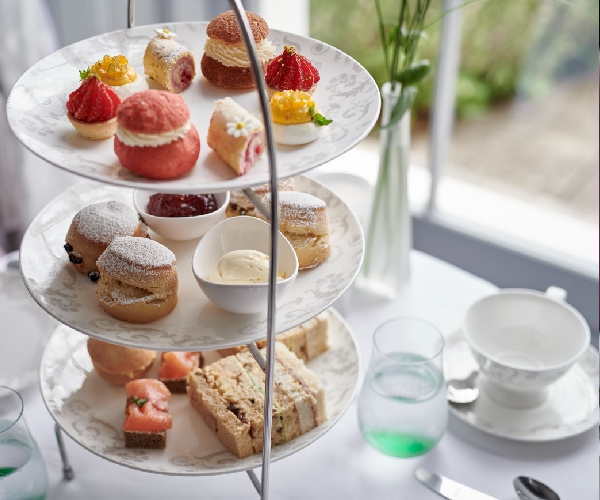 This is distinctly a Downtown Abbey moment. Three timers identify afternoon tea as a science too. Pour Darjeeling from pot to cup after two minutes, Earl Gray after three and Chai after five. There is a choice of Afternoon Tea with tea – or Prosecco or Champagne. A vegan afternoon tea features sandwiches such as Lebanese hummus and beetroot as well as vegan scones. Whatever the option, the cake tier is always heavenly. 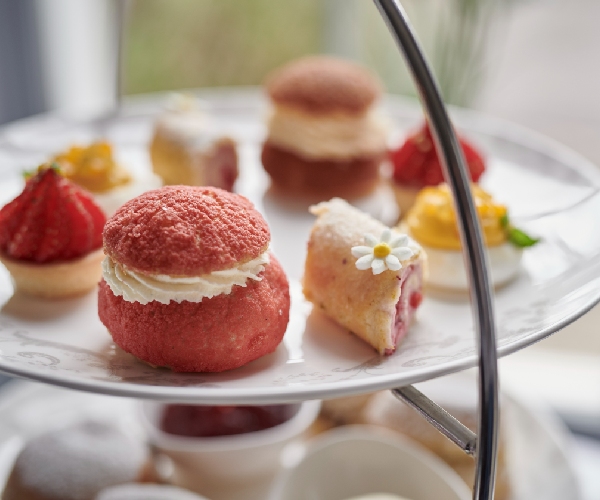 A quiet oasis perfectly positioned for exploring Windsor and the Thames Valley. Though wise guests will set aside time for a glorious afternoon tea, unwinding in the Soul Spa and relaxing with the leisure facilities.

Disclosure: Our stay was sponsored by Burnham Beeches Hotel.