Although we’d had a glimpse of Reynisfjara’s sea stacks when driving past, our first proper view was from Vík í Mýrdal (more commonly referred to as just Vik), the southernmost village in Iceland.

Reynisfjara is the name given to the beach that stretches for a distance of approximately two miles, whilst the large basalt sea stacks that rise up to 66m above sea level are actually called Reynisdrangar. It’s the most famous beach in Iceland and is made up of black sand and pebbles due to all the volcanic rock and sediment in the area. As the crow flies, it is probably only 3-4 kilometers from Vik, but by road – because you have to drive inland and back out again to get there – it is more like 11 kilometers away.

Framed by dramatic basalt cliffs with geometric columns, this wild stretch of North Atlantic coastline is the most famous beach in Iceland. It’s so otherworldly that it’s a popular choice for sci-fi movies; it featured in Star Trek: Into Darkness and was used to represent the planet Eadu in the Rogue One Star War movie. 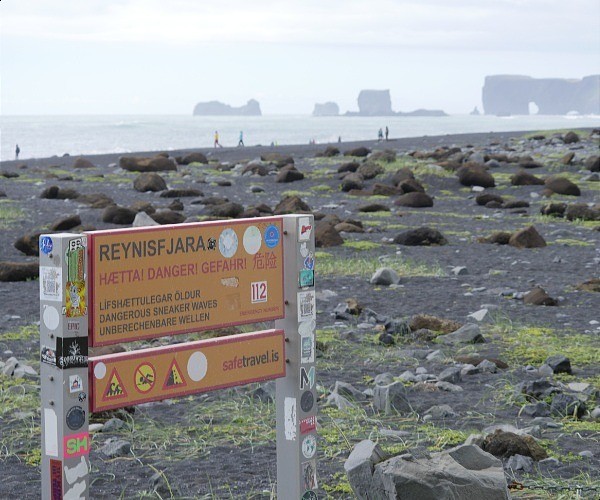 In the distance, at the western end of the beach, we could see the small peninsula of Dyrhólaey where there’s a natural arch. Access to the area is limited during May and June due to the nesting season but, in the Summer, it’s a great place to see puffins. 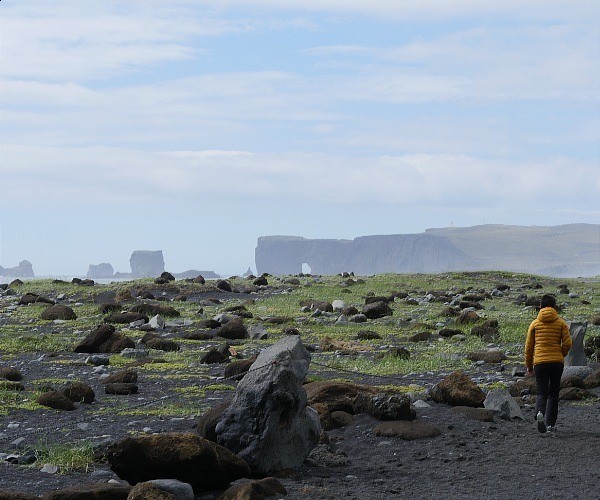 On the beach west of Mount Reynisfjall is the cave Hálsanefshellir, where striking columnar basalt formations can be seen. If you’ve ever explored the Scottish islands, you may have seen similar formations at Fingal’s Cave on Staffa Island. 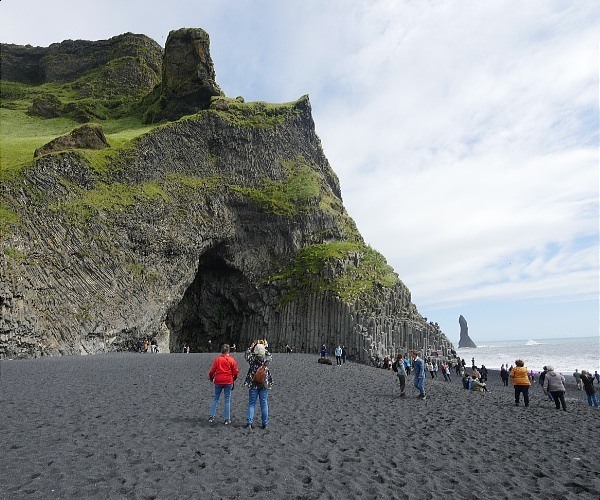 Columnar basalt is formed when magma cools slowly and cracks into columns, usually hexagonal, as the surface area decreases. The columns always stand perpendicular to the cooling surface and can be horizontal, spreading out from the centre, or vertical. 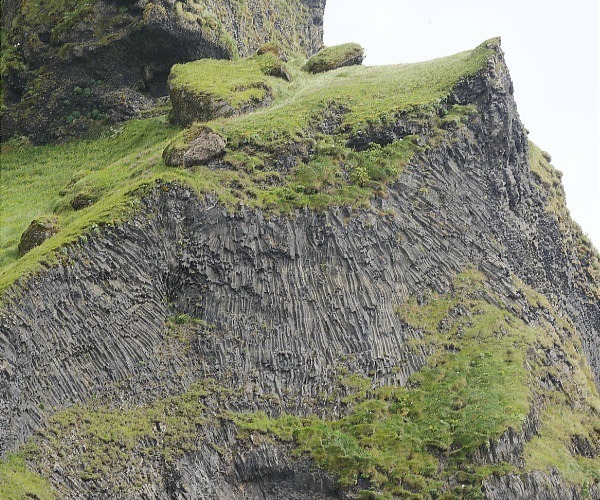 The varied forms of the columns are perhaps due to this being a cross-section of an ancient volcano, as dykes, small magma chambers and lava sills can be found among other rock formations. 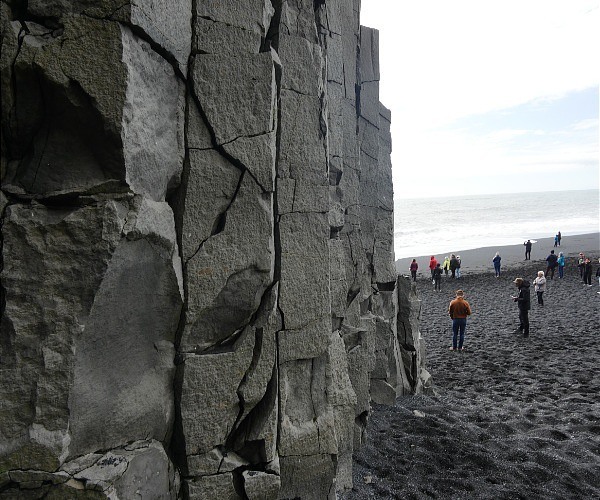 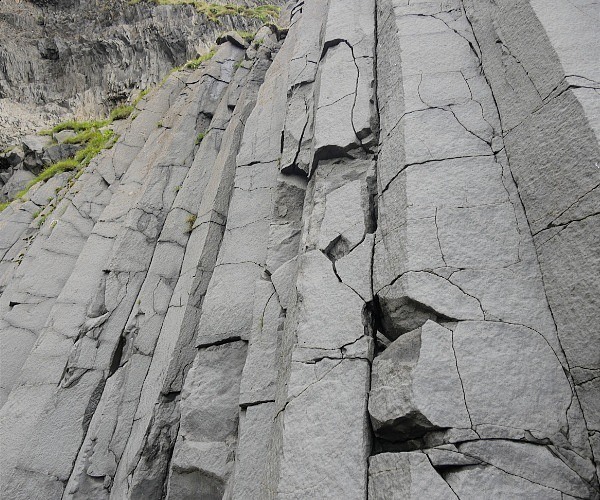 Legend has it that the three Reynisdrangar sea stacks were formerly two trolls dragging a three-mast ship towards the shore at night. By daybreak they had not been successful and so turned to stone. Nearest the land is Landdrangur, the first troll, Langsamur is the ship is in the middle (which you can see better in the pictures from Vik – from the beach it is obscured by the first stack), and Háidrangur (or Skessudrangur) is the troll at the rear. 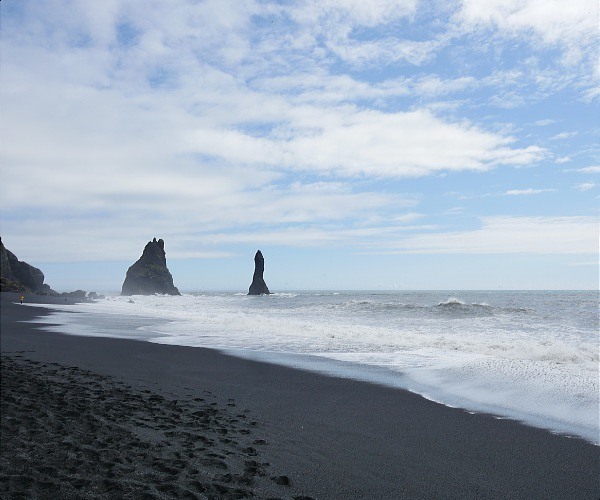 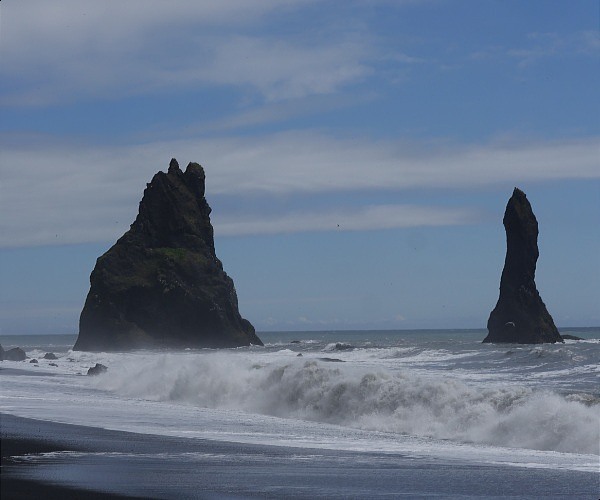 Whilst the scenery and geology are spectacular, don’t expect to find the beach to yourself. Admittedly we were there in the middle of the day during the season, but there were multiple coaches in the car park and we were lucky to find a parking space. 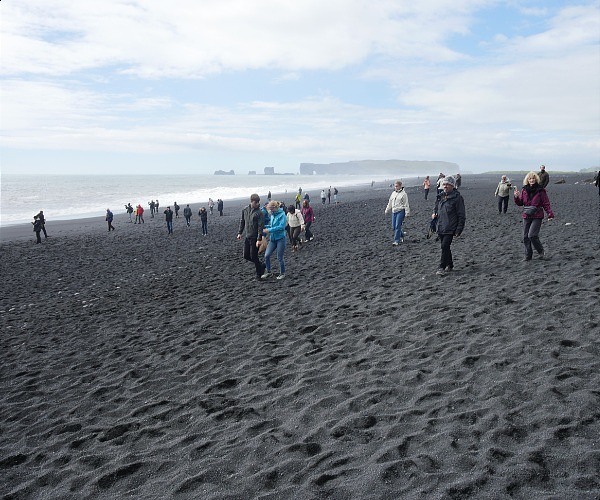 And please, please take notice of the warning signs… this is a truly dangerous place. If you look at a map and go due south from Reynisfjara, you’ll notice that there’s no landmass until you reach Antarctica. Nothing at all! With no barriers between the southern polar continent and this stretch of southern Icelandic coastline, smaller waves can coalesce and combine their energy to create what are called sneaker waves. 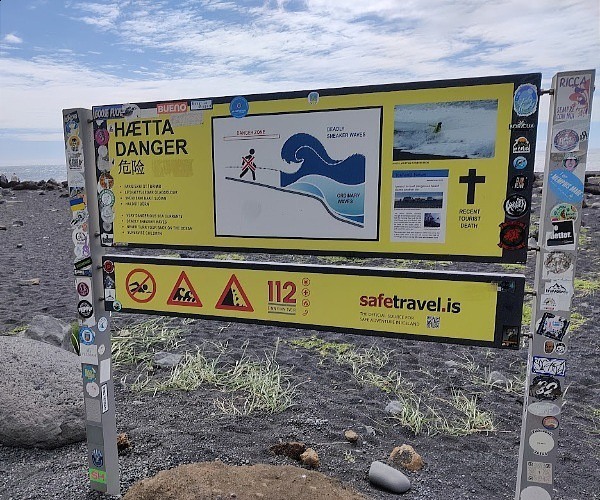 Despite the signs and plenty of news reports about lives lost on this very beach, I despaired at seeing young children close to the water’s edge, not paying attention, as huge waves came crashing down. Who in their right mind let’s their kids do this?! 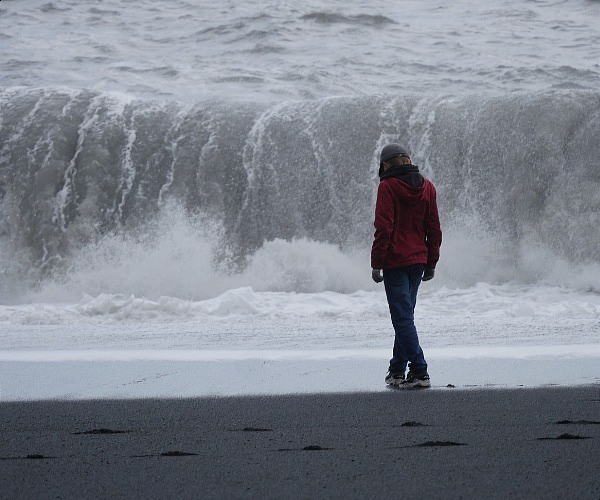 The warnings are there for a good reason. The ocean floor is said to drop a steep 8 metres right where the waves break. So, if you do get swept off your feet and dragged out a little, don’t assume you’ll be able to quickly stand up again. 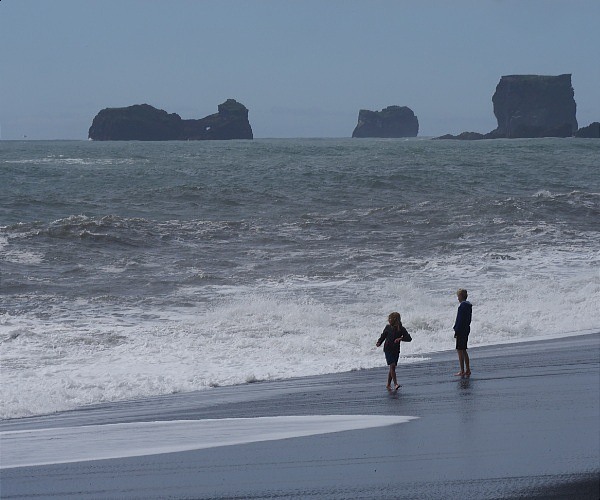 Please don’t be one of those people that gets caught out and dragged out to sea; You’ll not only be putting your own life in danger, but potentially the lives of others who may or may not choose to try to come to your rescue. Thankfully this young child did not get dragged out but, a few more meters nearer the sea, and it could have been a very different story. 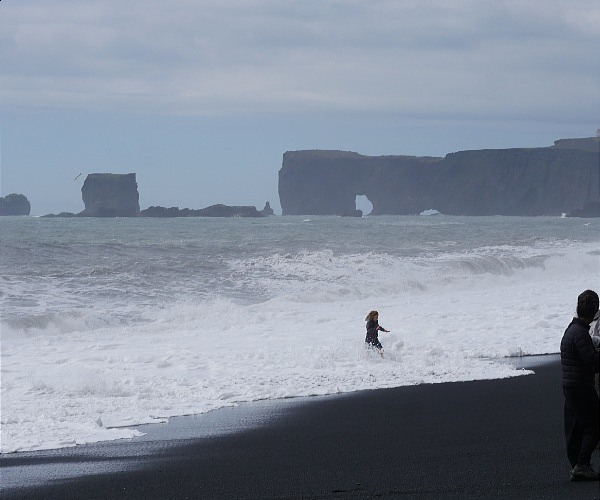 If you needed any more convincing, have a look at this rather alarming video from Finistère in Brittany to understand why you should not under-estimate the power of sneaker waves.

At the same time, don’t let something like this put you off visiting and enjoying Reynisfjara beach. It is a beautiful place – you simply need to excercise caution. There is no need to be at the water’s edge, or indeed walking over wet sand – stand back and enjoy from afar. The view is just the same! 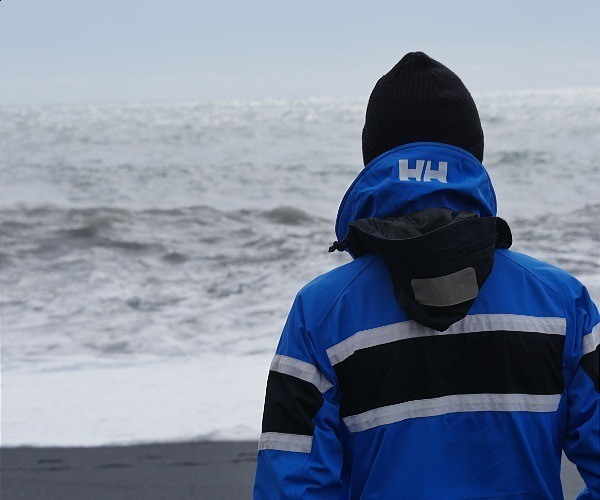 Planning a trip to Iceland yourself? You can watch a video from our trip to Iceland here. You can fleetingly see the Reynisdrangar sea stacks between 3m 44s and 3m 49s and 4m 23s to 4m 28s:

Disclosure: Our trip to Iceland was also sponsored by Helly Hansen.